At the Reliance AGM in Mumbai, the focus was on the Jio phone, which had been in the rumour mill for a long time. The new JioPhone comes with a number of features not seen in feature phones in the market so far, such as support for ‘smart’ apps, voice recognition, provision for digital payments, and most importantly 4G VoLTE support. In fact, as a 4G-capable feature phone, the JioPhone could potentially have an even bigger impact on India’s mobile and telecom landscape than Mukesh Ambani’s telecom venture did.

Mukesh Ambani started the Jio-centric announcements by reiterating the record-breaking journey of the company, which he claimed acquired 7 customers per second, and now has 125 million users as of now. He spoke about Jio users consuming 125GB of data every month, which includes 165 crore hours of high-speed video every month, adding that India has overtaken the US and China in data consumption to take the pole position. Extolling the achievements of the company, Mukesh Ambani added of the 76 crore mobile phone users in India, over 50 crore have been left out of the digital revolution because of feature phones. Jio will improve its 4G-only network over the next year so that it outstrips the 2G network in the country, and will set up 10,000 Jio offices across the country. On top, the company has launched its long-rumoured 4G-capable JioPhone

Reliance Jio’s two big selling points have been free voice calls and affordable 4G data, though the two features may have appealed to different audiences. While smartphone users love that data is now cheaper than before, feature phone users love the fact they don’t need to pay for calls and SMS, which obviously tend to be their major use case. The Lyf-JioPhone will aim to marry the two worlds, by offering 4G Internet and other features at a price that is expected to appeal to a wide audience. Lyf is Reliance Retail’s brand under the group has launched multiple Android smartphones till date.

JioPhone buyers will get an alphanumeric keypad, 2.4-inch display with QVGA display, SD card slot, torchlight, FM radio. It will come with a digital voice assistant, support for 22 Indian languages, and a panic button. 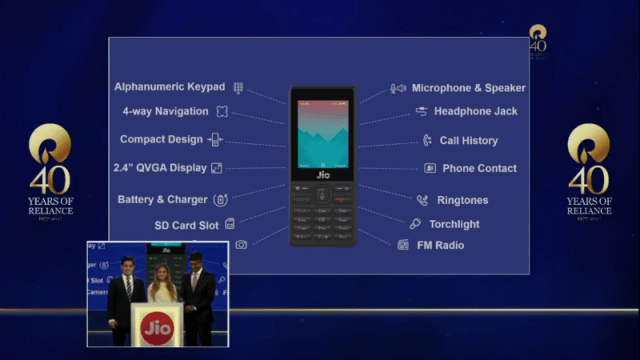 As for specifications, the phone is expected to come with dual SIM functionality, 2-megapixel rear camera, VGA front camera, FM radio, and Bluetooth connectivity. The JioPhone has been tipped to come with a 4GB of internal storage, and 512MB of RAM. The mobile will have the ability to install and run apps, including Jio’s own apps like JioTV, JioCinema, and others. The JioPhone will be able to connect to any TV using a cable developed by the company to show content from JioTV and JioCinema apps to watch the content on the big screen.

There is a new Rs. 153 Jio plan for JioPhone buyers, which will come with unlimited data – i.e. without caps; however the high-speed data is limited to 500MB. Those planning to buy the plan and the cable can opt for both together at Rs. 309. There will also be Rs. 24 Jio sachet with 2-day validity, and Rs. 54 recharge with 7-day validity.

The JioPhone is “effectively free,” announced Mukesh Ambani. However, the company will charge Rs. 1,500 as a refundable sum for the device from users. This sum can be claimed back by the customer at the end of 36 months of purchase.

JioPhone release date has been set as August 15, but as a beta test; public availability will be from September. Pre-booking starts on August 24, and deliveries will be on first come, first serve basis. Users can book the phone from Jio offline stores and MyJio app. The handset will be manufactured in India starting the last quarter of the year.

The Jio broadband service once again got a mention at the Reliance AGM, but Mukesh Ambani did not dish out any details. He, however, did say Jio remains on track to bring world-class optic fibre connectivity, and is the next big monetisation opportunity.